Call of Duty: Vanguard is a post-WW2 game about hunting down Hitler's successor 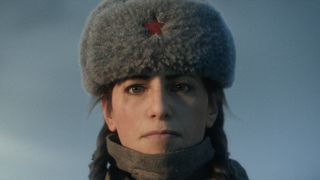 
After months of rumors and speculation about just what's going on with Call of Duty this year, Call of Duty: Vanguard has officially been confirmed as the next mainline game in the series. Vanguard takes the series back, for the seventh time, to World War 2 with a campaign that lead developer Sledgehammer Games hopes will feel new to the series.

Sledgehammer, which hasn't led development on a CoD game since 2017's Call of Duty: WW2, is shaking things up by setting most of the campaign after the official end of the war. Hitler is dead, the Nazis have lost, but the Allies learn of a troubling plan (called "Project Phoenix") to somehow facilitate "Hitler's successor."
What the heck does that even mean? Your guess is as good as mine. Vanguard's main villain is the fictional Heinrich Freisinger (inspired by the real Gestapo operative Heinrich Müller). In 1945, Hitler technically had a real successor: this dude, Karl Dönitz, who immediately surrendered and was eventually convicted of war crimes at the Nuremberg trials. So evidently there's at least a warping of history happening here. I'm crossing my fingers that CoD goes even further and delves into historical fiction, or even the supernatural, in one of its campaigns.

Call of Duty is no stranger to campaigns about small special forces teams deploying into hostile countries, but Vanguard's hook lies in this being a new concept at the end of World War 2. To deal with this whole successor problem, the Allies deploy a squad of four specialists from four countries: Arthur Kingsley (Great Britain), Polina Petrova (Soviet Union, also the woman that's been sniping Warzone winners out of helicopters), Wade Jackson (USA), and Lucas Riggs (Australia).

A still from the Normandy campaign mission we saw. (Image credit: Activision)
I got a brief glimpse at Vanguard's campaign during a closed press briefing. The mission shown comes early in the campaign, depicting Arthur parachuting behind enemy lines the night before the D-Day invasion (if you thought you'd get a break from D-Day in this WW2 game, think again).

Arthur barely survives the drop after his parachute burns up mid-fall and has to scrounge around for a weapon, eventually looting a Kar98 from a dead soldier. What follows is a stealthy Call of Duty mission that you've probably played before: sneaking around, shooting once you can't hide any longer, all that good stuff. It was familiar, but what struck me was how brief each firefight was. The player is never exchanging shots with more than one or two soldiers at a time. Soldiers hunt down Arthur, shooting through wooden doors and restarting the search when he's lost them. The sequence played out more like a stealth action game than a conventional CoD level.

It's a pretty effective eight-minute demo, but it also seemed very scripted. Every movement and shot was obviously choreographed. Heavily-scripted demos can be very effective for a game like The Last of Us Part 2 when showing off the potential of the same scenario to go a different way, but I'm doubtful that's what I saw in Vanguard. It could be that everyone's version of that mission will be identical, which would be a bummer.

It wouldn't be the first time a CoD campaign turned out to be less unique than a gameplay demo suggested. At a similar briefing held last year for Call of Duty: Black Ops – Cold War, we were shown a snippet of the stealthy mission inside the KGB headquarters. The presentation suggested that it'd be an expansive map with lots of options to complete your goal. In reality, it played more like a bundle of linear objectives you could tackle out of order.


That's not to say Vanguard's campaign won't be a good time—gunplay and animations look fantastic again (possibly thanks to the return of Modern Warfare 2019's engine). In truth, most CoD fans won't really know how to feel until we know more about Vanguard's multiplayer. We know Gunsmith is returning and got a taste of raw destructibility of maps, but Sledgehammer is saving the full multiplayer reveal for a later date.